Delve deep into the passionate history of one of Italy's most influential families: the Medicis. Discover their secrets and their artistic legacy on this walking tour of Florence.

Delve deep into the passionate history of one of Italy's most influential families: the Medicis. Discover their secrets and their artistic legacy on this walking tour of Florence. 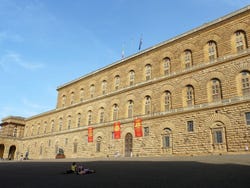 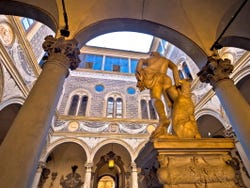 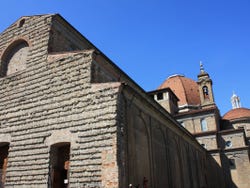 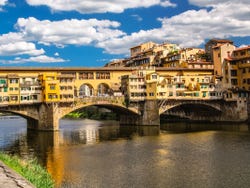 This guided walking tour of the Florence of the Medici family will take you to some of the Italian city's most important monuments, revealing the history of the richest family in Italy and their huge impact on the art and architecture of the region. Amongst the family members, there were three popes, two queens, various military leaders and a number of politicians, like Lorenzo "The Magnificent". Did you know that this family governed Florence for 350 years?

During the tour, you'll admire the façades of the Basilica of San Lorenzo and the Medici Chapel, where the remains of the family members rest, as well as the Uffizi Gallery, the prestigious gallery originally built to house the city's Magistrates. The route will of course take in the iconic Ponte Vecchio, where you'll hear how the family modified the structure of the bridge in order to adapt it to their bourgeois tastes.

Your expert guide will explain their history and reveal curious facts surrounding them while you contemplate the famous Vasari Corridor, a covered passageway that connects the palace with the Palazzo Vecchio so that the Medici family could pass freely between the palaces without mixing with the public.

The visit will come to an end at the Palazzo Pitti, a majestic Renaissance palace where the Medici family would hold extravagant parties and banquets as a display of their power and wealth.

Please check local restrictions before traveling. All of our services comply with recommendations to avoid the spread of Covid-19.

The activity takes place with a guide that speaks in English.

You can book up until 1 hour before the activity as long as there are still places. Book now to guarantee your spot.

Wheelchair accessible. This must be indicated in the reservation. An accompanying person is required.

All services published on Civitatis are carried out in accordance with our Sustainability Code. Specifically, this activity applies the following practices: Show more

No single-use plastics are used.

The activity helps the dissemination of local cultural heritage.

Free! Free cancellation up to 24 hours before the activity starts. If you cancel under this time or do not show up, you will not be refunded.
US$ 20.80
Book

These are genuine reviews written by our customers.

Enjoyable and professional day. To repeat, I recommend it. Opinion translated. Show original.

It was a really interesting and intense tour both for the wonders of Florence and for the great professionalism and preparation of Mr. Francesco, who for 2 hours and 40 minutes told us in depth the history of Florence and the Medici family. I advise. Opinion translated. Show original.

Our guide Marie was perfect: pleasant, knows the city perfectly as well as its history and offers you many anecdotes. A very pleasant moment! Opinion translated. Show original.

EXTRAORDINARY EXPERIENCE Guided tour, entirely on foot, assisted by "Francesco", an engaging and fun guide, capable of letting you immerse yourself completely in the experience. Two productive hours during which we had the opportunity to see all of Florence including: Medici palace, Medici chapels, cathedral ... History, culture and art enriched by goodies and stories that, despite having already been in these places, we still did not know .. Recommended strongly. Ps ask for Francesco Opinion translated. Show original.

I travelled with my partner
Show all the reviews
like

9.40 / 10 1,208 reviews
The historic centre of Florence, capital of Tuscany, is an open-air museum dedicated to the Renaissance. Discover its past with this free tour!
Free!
Book
like

8.60 / 10 2,380 reviews
Take a day trip from Florence and discover three of Italy’s most beautiful cities. The Tour also includes an exquisite 3-course Italian lunch at a winery.
US$ 71
Book
like

8.60 / 10 1,378 reviews
Take a day trip to Cinque Terre, five fishing villages on the Italian Riviera surrounded by hills and vineyards. One of the most popular day trips from Florence
US$ 58.50
Book