The Basilica di Santa Croce is the largest Franciscan church in the world. Measuring 377 ft (115 m) long and 124 ft (38 m) in width, it is the second biggest temple in Florence, exceeded only by the Cathedral.

The church was established in 1294 on the same site where a small chapel had previously been built to commemorate the death of Saint Francis of Assisi. When the construction of the Basilica was completed, the principal Dominican church, Santa Maria Novella, was sidelined.

Although the interior of the church is not as remarkable as Santa Maria Novella, which has wooden beams on display, the sculptures and the paintings that decorate the walls of the church are highly valued. The Basilica’s chapels house various frescoes by remarkable artists like Giotto, Brunelleschi and Donatello.

The Santa Croce square is not only packed with street artists on a daily basis, but is also where activities take place throughout the year.

Temple of the Italian Glories

The Basilica of the Holy Cross (Santa Croce) is also called the Temple of the Italian Glories because it is the resting place of many illustrious Italians. Its mausoleum has nearly 300 tombs dating from the fourteenth to the nineteenth century.

Some of the most renowned people buried in Santa Croce are Galileo Galilei, Machiavelli, Lorenzo Ghiberti or Michelangelo.

What is included in the visit?

The guided tour hs an English speaking guide and gives visitors access to the church, its chapels, two cloisters, a small museum and several smaller halls.

If you could only visit one church in Florence, we would recommend visiting Santa Croce. Its sculptures and the sheer size of the building are sure to impress.

To discover all Santa Croce has to offer, we suggest spending at least an hour in its interior. 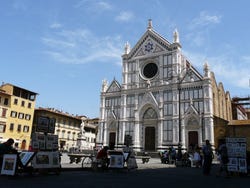 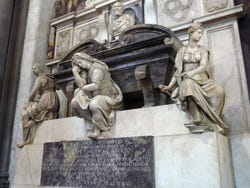 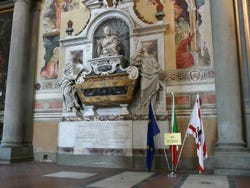 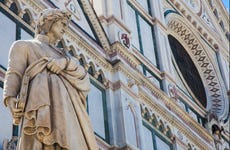