Wind your way through a labyrinth of hidden doors and corridors concealed within an ancient Florentine palace on our Palazzo Vecchio Secret Passages Tour. You'll enter an unknown world and see a fascinating historic place.

Wind your way through a labyrinth of hidden doors and corridors concealed within an ancient Florentine palace on our Palazzo Vecchio Secret Passages Tour. You'll enter an unknown world and see a fascinating historic place. 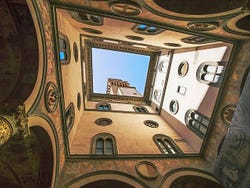 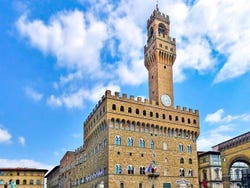 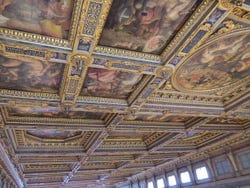 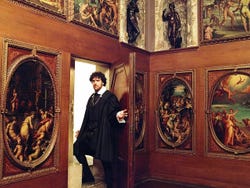 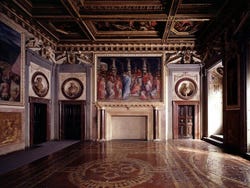 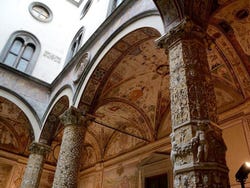 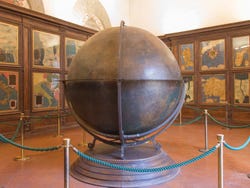 The Palazzo Vecchio has presided over the Piazza della Signoria in Florence since the architect Arnolfo di Cambio began its construction in 1299. This majestic building has borne witness to numerous conspiracies and undergone major renovations over the years. What few people know, however, is that the rulers who lived there used these alterations to add clandestine entrances and chambers for their personal use.

To discover the secret passages of the Palazzo Vecchio, we'll meet at 9:50 am at the entrance of the palace on Via dei Gondi. The guide will be waiting there to take you on a tour that's impossible to do on your own.

We'll begin by climbing up the secret staircase of the Duke of Athens, Gualtiero de Brienne, who gave the Palazzo Vecchio its fortress-like appearance. This nobleman used the passageway to flee the residence after narrowly escaping a conspiracy.

Next, we'll come to the Hall of Geographical Maps and pass through a door hidden in one of its panels. Here we'll see the mysterious study of Francesco I de' Medici, where this young prince used the space to hide his precious treasures. While we're here, we'll try to guess why it's shaped like a boot.

Our tour will end in the Hall of the Five Hundred, where we'll unveil the secrets concealed within this regal place. After discovering this unknown side of the Palazzo Vecchio, we'll say our goodbyes at 11 am.

Please check local restrictions before traveling. All of our services comply with recommendations to avoid the spread of Covid-19. Show more

It is compulsory to display a complete Covid vaccination certificate or a negative PCR or antigen test. This information is for guidance only and may change depending on local regulations. Always check the restrictions before travelling.

A safe distance of one metre between clients will be maintained whenever possible.

The use of masks is obligatory. The client must bring their own mask.

All those running the service (guide, driver etc...) will wear a mask throughout its duration.

Disinfected radio units will be provided, and headphones will be single-use.

The transport used will be disinfected before and after each service and deep-cleaned every 24 hours.

Showing your voucher on your phone will be enough, and it is not necessary to print anything.

The activity takes place with a guide that speaks in English, although it may occasionally be done in two languages.

You can book up until 48 hours before the activity as long as there are still places. Book now to guarantee your spot.

All services published on Civitatis are carried out in accordance with our Sustainability Code.

Free! Free cancellation up to 48 hours before the activity starts. If you cancel under this time or do not show up, you will not be refunded.
US$ 31.30
Book

9.40 / 10 1,208 reviews
The historic centre of Florence, capital of Tuscany, is an open-air museum dedicated to the Renaissance. Discover its past with this free tour!
Free!
Book
like

8.60 / 10 2,380 reviews
Take a day trip from Florence and discover three of Italy’s most beautiful cities. The Tour also includes an exquisite 3-course Italian lunch at a winery.
US$ 71
Book
like

8.60 / 10 1,378 reviews
Take a day trip to Cinque Terre, five fishing villages on the Italian Riviera surrounded by hills and vineyards. One of the most popular day trips from Florence
US$ 58.50
Book